So all is done and dusted for us in the Dublin SCC team.  Most of the team have headed off, and the rest of us will have departed this fine city by the end of the day.  I’ll miss it, but I’m looking forward to getting back to my family.

Our presentation is delivered, and that was a great (if slightly nervous) experience, and our final report is submitted, ready for the editing team to correct all of our spelling mistakes and tortured English.  I’m very much looking forward to seeing the final product.

It has been a very immersive experience.  We were advised to leave our day jobs behind as much as our day jobs would allow us to, and looking back I can see why.  For three weeks we have all been living and breathing Dublin, and Solar.  The team has come from a number of different countries and cultures, and we all have different backgrounds, within IBM and HSBC.  The result has been a very dynamic and fulfilling experience; it’s not been without its moments of lively discussion, but I can honestly say that I have found every member of the team a delight to work and spend time with.  It’s been a group of people who have engaged, entertained, challenged and amused me.  I could say the same about the members of Dublin City Council and those others we have worked with, and of course Deirdre and the local team who have made it all work pretty much like clockwork.  Thank you!

My only concern is that maybe we should have tidied the team room a bit more when we left….

Fare-thee-well until we meet again Down by the Liffey water..

Thanks to everyone for these amazing 3 weeks – I shall cherish my memories in Dublin forever.

Thanks to my colleagues Ana, David, Deirdre, Javier, Lindsey, and Sachin, Mark and team from city council, Codema, and all the stakeholders who took the time to share their knowledge with us – I’ve learnt a lot from all of you.

So farewell Dublin, Till I return to see you again..

[title from an Irish song by Brian Warfield]

Comments Off on Fare-thee-well until we meet again Down by the Liffey water..

After three weeks of intense interviews, site visits and data analysis, we delivered our final presentation to Dublin City Council and members of the community at a big closing event today. We’ve recommended that Dublin move forward with implementing solar PV on key municipal /government buildings – the technology is there, it will help them achieve their energy renewable goals, the numbers look right financially, the leadership is in place and much of the expertise required for a successful solar implementation already exists in this community.

Before I pack my suitcase and get ready to return to Austin, I want to thank Dublin (and especially the folks at Dublin City Council ) for such an amazing three weeks. You gave us incredible access to the city and we hope our report will make a positive impact on the community.

My SCC colleagues Ana, Dave, Deirdre, Javier, Sachin and Vijay are incredibly talented — I learned a ton from them on this journey plus we had some fun along the way. It has been an honor to be a part of this program. 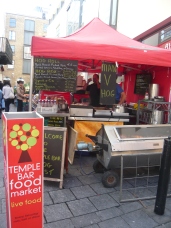 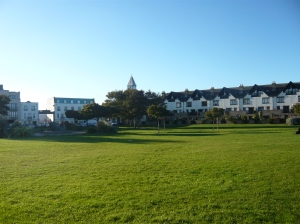 We’ve seen different weather conditions in Dublin in the past 2 weeks – its rained a bit, some days were cloudy, and some have been amazingly sunny and pleasant like last weekend. And the Irish who are known for their humor and wit do not shy away from cracking a joke or two about their weather over a pint of beer. But taking a look at the data, you notice that Ireland actually receives a fair amount of harvestable solar energy, measured as solar irradiance. Dublin actually receives approximately the same annual irradiance as Waldpolenz (east of Leipzig in Germany) which has a very large solar farm!

The map above shows the annual solar irradiance across europe in kWh/Sq. meter (total solar energy received on 1 Sq. meter of earth in 1 full year). While plants harvest a tiny fraction of this energy, commercially available photovoltaic (PV) panels are able to harvest about 15% of this. To put things in context, 1 kWh is the amount of electricity needed to power a 50 Watt bulb for 20 hours. A one-bedroom house in Ireland might consume about 3100 kWh of electricity in 1 year.

But is solar power expensive? Well, it depends on the price of solar panels and the electricity they generate during their lifetime. Here is a sample calculation: A 1kW peak PV system (which might require 7 Sq. meter of roof-area to install) can produce approximately 850-900 kWh in 1 year in Dublin (orientation/tilt/technology play a role, check this). If these panels last for say 20 years (good ones last for more), they could produce 900 x 20 = 18000 kWh. If this PV system costs you 1800 Euros (maintenance/system size play a role, check the photovoltaic electric cost map), then you are effectively producing electricity at 10c/kWh for the next 20 years but investing in advance.

Electricity prices in Ireland have increased over the last couple of years (currently higher than EU average). I’d probably feel less guilty using these fancy cube-lit sidetables in my hotel room if they had been powered by solar 🙂 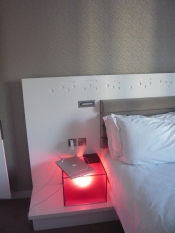 Comments Off on Sunny thoughts from Dublin..

We’re winding things down here in Dublin and putting the final touches on our report — what an incredible experience this has been! On Thursday, we have the opportunity to share our findings from three weeks of intense interviews and site visits. We’re hoping to have a packed room on noon at Wood Quay — filled with Dublin City Council, local business leaders, university representatives and community members. We believe Dublin is ready for solar energy in a bigger way, and look forward to sharing the details. Please join us if you’re in the area!

Comments Off on Dublin SmarterCities Challenge event on Thursday

There are some things in life that you just have to do more than once.  And after last weeks fun ride up into the Wicklow mountains, Javier and I had another crack at it.  This time Javier hired a better bike, from 2wheels over in Sandymount, one with gear ratios that were actually suited to hills (and that actually shifted properly!)

The plan was simple, if somewhat optimistic: we would head on up to the somewhat forbidding gate at the bottom of the dodgy service road leading up the last bit of Kippure that we rode to last time, but instead of doing the sensible thing and staying the right side of it, we would ignore the big yellow warning sign and go on up…

From the gate it is another 3.3km, climbing 220 metres or so to the radio mast on on the summit at 757 metres.  It looks gentle enough from here, right?

(At this point I should note that I’m not some kind of super cyclist; the only thing I have in common with Bradley Wiggins is that Sky would not let me cycle this year’s Tour de France for them either – but for somewhat different reasons.)

The only thing is that it was a little bit windy on the way up.  Or rather it felt like it was blowing a gale.  Days like this press home why there are currently 216 wind farms in the island of Ireland, having an installed capacity of over 2,800 MW (16.4% of Ireland’s electricity in 2013 came from wind sources).  It is a country with fantastic wind resources for energy production, although as we’ve been learning these past weeks, you can’t build a country’s renewable energy supply on wind alone – it’s too variable for a start, and with most of the generating capacity on the west side of Ireland and most of the consumption on the east, there are also transmission issues, with a proposed East-West grid causing some controversy.  This day however, it felt like you could generate Dublin’s entire electricity supply from a couple of whacking great turbines placed up on Kippure (note: this is not an official recommendation of Dublin SCC)

Despite all this, Javier and I decided that we would give it a go…

Much like a Smarter Cities Challenge assignment, Kippure starts off reasonably hard work and then proceeds to get steadily harder with not much of a let up, until you get to the incredibly hard bit at the end that makes you realise that the start was easy in comparison.  Anyway, I digress.  Let’s just say it was a challenge, not helped by the gale force winds and a bit of rain.  But we made it.

The second picture above is me holding my bike in the wind.  I’m not holding it at a funny angle or anything – it’s being blown that way by the wind.  I was trying hard enough to a) stay standing and b) not let go.  Still, the view was worth it, and the sun even came out:

We didn’t hang around on the top.  The only other soul there, a walker we found huddling behind a concrete block, had already struggled off into the wind, and we were woefully ill-equipped to be standing around on top of a mountain for any length of time.  Going down was in some ways harder than going up – it was so windy we had to walk our bikes past the first few bends.  (Did I mention it was windy?)

Finally though, we got to Enniskerry.  The week before we had stopped in Poppies.  This week we chose Kingfishers Kitchen – mainly on the grounds that they had a covered terrace with big warm towels on the seats, but their coffee and pannini were excellent.

This time next week, we’ll be on our way home, having finished our time here, presented our findings and completed our report – so this will probably be my last chance in the foreseeable future to get out into the Wicklow mountains.  I’ll miss them; but it’s not all that far for me really – I can always come back…

Comments Off on On Your Bike, pt. 2

Week 2 comes to a close in Dublin

We are both exhausted by the intense schedule we’ve experienced since arriving (30+ interviews plus multiple site visits around the city), and inspired by the potential to make a real difference for the city via our final report. We’ll take a little break on Saturday to recharge and collect our thoughts, then it’s time to finalize the details. We’ll be up in front of Dublin City Council and the community on Thursday to deliver our final recommendations — which we hope prove to be the information they need to move forward with implementing solar on some municipally owned properties. Doing so will bring both environmental and financial benefits for Dublin.

Comments Off on Week 2 comes to a close in Dublin